Quinoa (pronounced KEEN-WAH) is one of the oldest grains known to man.  It apparently was a staple of the Aztec diet—a role it could fill admirably because of its high nutritional value.  Quinoa is one of the few grains that has complete protein—that is, all the essential kinds of protein people need to eat because our bodies can't make them.

The reason that quinoa has survived for millennia may be because of its coating of saponin, a resinous, bitter substance that protects it from birds and insects and shields it from intense sunlight.  But this coating is easily rinsed off, leaving a wonderful mild flavor.

Quinoa is low in carbohydrates and packed with nutrition.  The Food and Agricultural Organization of the United Nations considers quinoa one of the best sources of protein and amino acids around.  The World Health Organization rates its protein as similar in quality to the protein in milk.

This food is low in saturated fat, and very low in cholesterol and sodium.  It's also an excellent source of calcium.

You can use quinoa in place of almost any grain in most recipes.  Its flavor is very mild and pleasant—much less starchy than rice.  For each serving, you'll want to use a quarter cup to a half cup, depending on how big a part of the meal you want it to be.

When it's raw, quinoa is pretty tough to chew.  Light cooking moistens and softens it.

Quinoa comes in two varieties, white (top picture on the left) and red (the rest of the pictures).  White quinoa becomes translucent when cooked.  With red quinoa especially, you can see little white extrusions from the germ, kind of like sprouts, after it's cooked.

How to Prepare It

Quinoa that isn't pre-rinsed when you buy it should be rinsed before you cook it to remove its covering of saponin.  Place the grain in a fine strainer and hold it under cold running water until the water runs clear.

To cook, put about twice as much water as quinoa into an uncovered pot and simmer it until the water evaporates, about 10 or 15 minutes (keep an eye on it).

Here's a quick dish that will both satisfy your stomach and tickle your taste buds.  Chop up a stalk of celery, a mushroom (portabella is nice), and a handful of mung bean sprouts.  Add some craisins or raisins for a sweet surprise and dress with oil (virgin olive or cod liver), apple cider vinegar (a little goes a long way), and some spices, salt, and pepper.  The recipe is written out at Healthy Recipes: Quinoa Salad. 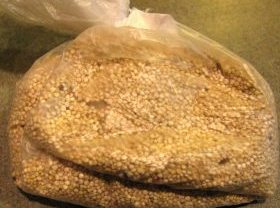 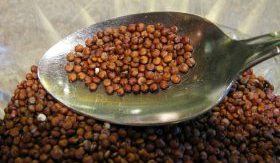 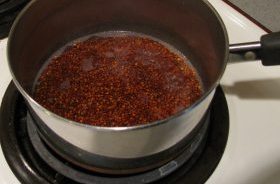 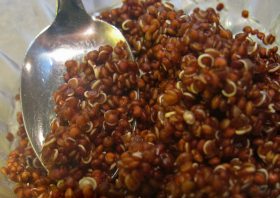 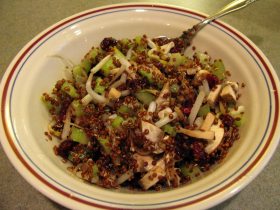